Find out more about City of Isfahan

Isfahan is one of ten cities designated by UNESCO as a universal heritage. It contains a wide range of Islamic Architectural styles ranging from the 11th to the 19th century.
A majority of these sites recognized by UNESCO are situated within walking distance of Iran Hotel. Below, you will find an image and brief description of some of these tourist attractions.

Imam Square is 500 meters long and 150 meters wide and used to be known as Meydane Naghshe Jahan (Design of the World Square) before it was rebuilt by Shah Abbas I. In the center of the square, you will find a large pool and lawns plus the goal posts for the polo ground that originally were built here. Around the square, you can visit the Ali Qapu Palace, Sheik Lotfolah Mosque, Jome’ Mosque, Chehel Sotoon, Hasht Behesht Palace, and other places of interest that are too numerous to mention here.

Ali Qapu is dominates the south eastern site of the square and its size and magnificence symbolize the strength and authority and the Safavid dynasty. The verandah was the place that the Safavid monarchs would gather to watch the games of polo being played in the center of the square. The interior of the building is decorated with charming and beautiful designs.

Built in 1602, by Shah Abbas I, Sheikh Lotfalah Mosque is located immediately opposite the Ali Qapu Palace. This mosque is one of the most beautiful mosques in Iran and the quality of workmanship and design far surpasses other mosques in Iran.

In the late 19th century the English artist, Sir Robert Ker Porter wrote of the Avenue: “We passed through the most charming parts of the Chahar Bagh; taking our course along its alleys of unequalled plane trees, stretching their broad canopies over our heads, their shade being rendered yet more delightful by the canals, reservoirs and fountains which cooled the air and reflected the flickering light through their branches. Thickets of roses and jasmine, with lustering parterres of poppies and other flowers embanked the ground, while the deep green shadows from the trees, the perfume, the freshness, the soft gurgling of the waters and the gentle rustle of the breeze, combining with the pale golden rays of the declining sun, altogether formed an evening scene, as tranquilizing as it was beautiful.” 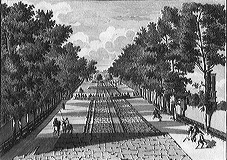 The Friday Mosque is equivalent in importance to a cathedral in a Christian city. The Friday Mosque in Isfahan is a dynamic expression of some 400 years of Iranian Architecture encapsulated into the small area it occupies. In some ways it therefore brings together many of the themes and decorative ideas which achieved individual expression in other monuments throughout the city. It is almost as though, by spending a day or two in this mosque, you can see most of the rest of the architecture of the city.

Shah Abbas II (1642-1667) commissioned the work on Chehel Sotoon Palace and work started as early as 1598, and is said to derive its name from the pillars which dominate the verandah. There are twenty of these laid out in three rows of six with two additional ones on either side of the main entrance. When these are reflected in the water of the pool the number is made up to forty, the Farsi for which is “chehel”.

The palace of Hasht Behesht was completed in 1669. It has fine murals and spectacular roofs while retaining a domestic simplicity. It consists of an almost octagonal base on which four verandas are raised and four smaller sets of chambers, while the center is surmounted by a spectacular ceiling. The exterior tile work is notable for its naturalistic style, depicting peacocks and angels alongside trees in a less stylized way than previous buildings, while inside there are charming murals on the walls and a further variety of spectacular ceilings.

This bridge is made up of a series of 33 arches and was commissioned in 1602 by Shah Abbas I from one of his Generals. The name is derived from the Persian for 33 (Si-o-Seh). The bridge is built on a series of pontoons of great width and there is a famous tea house amongst them which is accessible from the southern bank.The lower level of 33 arches is surmounted by a second layer, with one arch above each of the pontoons and two arches above the lower single arch, giving it its name and rhythmic appearance. The road along the top is sandwiched between high walls which give some shelter from the wind as well as protection for travelers who can walk along the footpaths on either side to avoid the crush of the traffic. The bridge itself is 295m long and 13.75m wide. The thirty four piers on which it is constructed are 3.49m thick and the arches are 5.57m wide. The bridge runs over the Zayandeh Rood (Lively River).

This bridge was built between 1642 and 1667 under Shah Abbas II. It takes its name from the district of Khajou on the northern bank of the Zayandeh, which it connects with the South. It derives its inspiration from Si-o-Seh Pol, being built in two layers, however it expands and enhances many of the features of the older bridge. The bridge is some 110 meters long and a little over 20m wide for most of its course. The eastern side of the bridge has a high sill which collects the water, raising it by some 2m. This provides a basin from which irrigation water for the surrounding area is drawn off in a series of channels. On the western side there are steps over and between which the water pours and on which people collect to do their laundry or just to talk. From the lower section of the bridge which consists of some 20 arches, stairs lead to the spacious second storey where a series of niches has been cut for people to collect and meet. An octagonal pavilion is set in the center of the bridge which now houses an art gallery.